Which was one of the main reasons M&I sold our current house. So we could save some mulah & travel the world.

Or even just the US would be grrreat.

I’ve been toiling around with the idea of painting my own Toms.

Having never owned Toms, I thought it was probably time to join the band wagon.

The other day, I saw this commercial for Bobs by Skechers.

We donate a pair of shoes to a kid in need every time you buy a pair!

But I can’t dog on them because they are cheaper, if only by $5 bucks. Hey, we’re tryin’ to save money, here.

If I’m going to buy an unnecessary pair of  shoes and defile them with paint, I was going to save every penny I could.

And thanks to Zappos.com, I got them two days later.

[this isn’t a commercial, I swear]

My original plan was to do a music staff,

then a New York City theme,

then a Friends theme,

then a Dexter theme.

I had a hard time making up my mind, believe that.

In the end, I decided on NYC.

For those of you who aren’t aware…

I’m mildly obsessed with that city.

I’ve visited twice, and if I could pick up everything and move to any place in the world…it would be there.

Yeah, even over Paris or Italy. Or Lawrence, for that matter.

Anyway, back to my point. 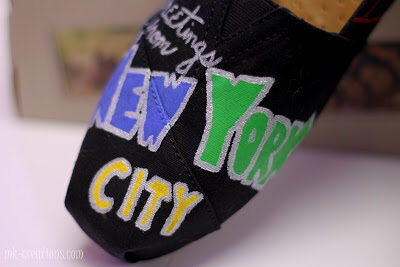 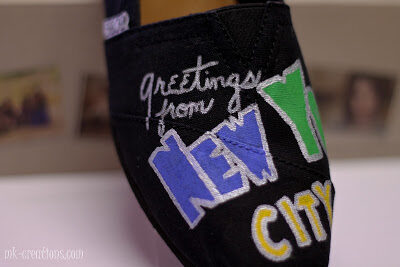 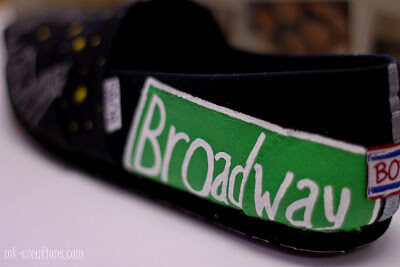 uhh…not to toot my own horn, here, but how flipping

And guess what else?

I free-handed that shiz.

Okay, maybe they didn’t warrant all of that, but at least some.

But it was totally worth it.

These are going to keep a lot better than the others that I made: 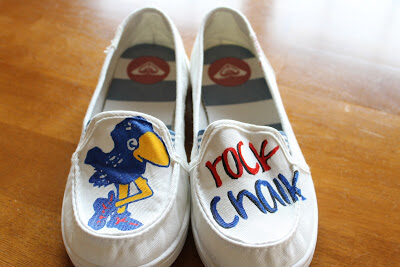 Not even sure what I was thinking when I chose white.

But those are pretty spectacular, too, amirite?

I’m still debating on whether or not to put them on my shop.

They were a ton of work.

Much more fun than painting letters with baseball stitching.

Alright, I’ve got a crap ton of errands to run, and I would like to get home at a decent time to go for a run.

It was nice chatting with you, as always, though the conversation seems a little one-sided.

Let me know what you think in the comments.

But since I asked, it would be rude not to.

To stripe or not to stripe

I clicked it up a notch in August